A Polar Bear in Quito

This morning, I woke up to a bunch of Facebook status updates about my Bowdoin 5-year reunion, which is going on this weekend. Of course, I’m very happy to be here in Quito, but I know some things — like this — will pop up and make me feel very far away from people and things I wish were closer. Alas, it comes with the territory, and I’m totally ok with it. Prepared, if I can be.

But, I’ve gotta say… Isn’t it funny how life goes? I mean, I never would have predicted that I’d miss my 5-yr reunion for a travel writing job in Quito, Ecuador. And here I am! Yeah, I’m pretty much done with predicting my life. Every time I think I can settle into something, someone, somewhere, it turns out… I’m wrong. Sometimes things change, sometimes people leave…This time, it was me. It was time for it to be me.

Yes, I’m missing my Bowdoin 5-year and I would have done anything to be there with some of the wildest, craziest, most intelligent and most hilarious people I’ve ever met… But I am here in Ecuador, meeting new people instead.

Let’s take tonight, for example. After a busy day of work and finally wrapping up some of the freelance writing I did about Buenos Aires (ok, I admit, I can’t stop thinking about Buenos Aires right now…), I met up with my roommate and two Austrian women in Plaza Foch, the main plaza in the heavily populated restaurant/bar hub of the city called La Mariscal. Now, here’s a funny little thing about the world… (By now you probably picked up on how much I love funny things about the world.) 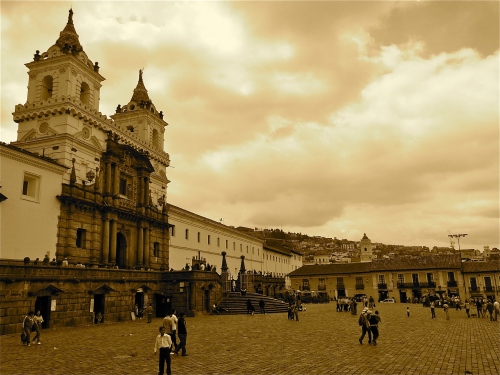 I grew up with au pairs. I’m one of five kids, and every year we would have a different au pair from a different country come and live with us. There was Genoveva from Spain, who was way too sexy, got my mom’s bike stolen, and literally set our kitchen on fire. She was fired. Twice. Then there was Tina and Yana — Finnish twins who switched off babysitting the four of us when we were all very little, and I still bump into them on the streets of NYC because they both loved it and stayed. There was Elaine, the Jamaican woman who I vividly remember once took me out of school during nap time so she could hang out with her friend and watch tv. She gave me Nilla Wafers (hello, delicious) and told me not to tell my mom. I felt like we were doing something bad so I told my mom later that night. Elaine got in trouble. She was gone. Then there was the adorable Ivonne from the tiny town of Quidlenburg, Germany, who had a very sexy boyfriend named Karsten (who looked exactly like Gavin Rossdale), and burst out in tears the first night she arrived in NYC, absolutely terrified, having never left Germany. There was Elena, also from Spain, who ended up sneaking her friend Marisol into her room all the time and we eventually realized they were probably lesbian lovers. There was Tiia, again from Finland, who was my littlest brother’s first babysitter (she looked exactly like Baby Spice from the Spice Girls) so they had a special bond. And then there was Ursula… our very artistic and hip au pair from Austria. I must have been about ten when she first arrived in NYC to live with us. She fell in love with NYC and has been living in NYC ever since.

Through the wonder that is Facebook, after not seeing Ursula for YEARS, we reconnected. When she found out that I was moving to Quito she said “You MUST get in touch with my Austrian friend who is living there!” So I did. Her Austrian friend, Dorit, wrote me an incredibly sweet message, told me not to worry about moving without knowing anyone, and assured me that she would be waiting to meet me in Quito. She also told me that her good friend Kari was looking for a roommate. I got in touch with Kari, and within two emails, I had a roommate. Now, she is still my roommate. And she’s great. Between Dorit and Kari, I knew I was coming to Quito with two potential friends, and that was exactly  what I needed to cushion the move. It was kiiiiind of wonderful.

Dorit, her Austrian friend Sonia, Kari and I went to a smaller town outside of Quito for one of the best Japanese restaurants in the area. Oh my goodness, it was delicious. The restaurant, NOE, was located in this adorable plaza surrounded by bars and restaurants in a town called Cumbaya  (yep, the same one I passed through to get to Papallacta the other day). There we were, two Austrians and two Americans at a Japanese restaurant in Ecuador, talking about Muslim men, eating crab, and laughing about the quirks of living with people. It wasn’t just the chocolate mousse at the end that made it a wonderful treat. 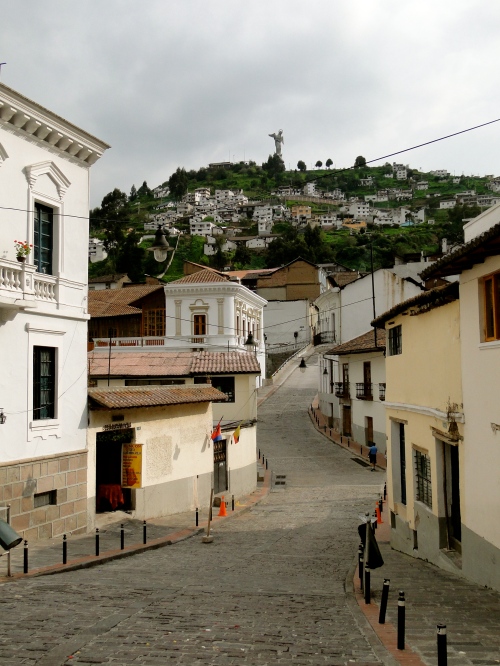 It was a lovely night. I woke up this morning wishing I could be at my college reunion, in Maine, with all my old friends reliving the past (we promised each other long ago we’d all be there and I was the last person I though wouldn’t fulfill the promise). But now, I’m going to go to sleep excited about new friends, a new city, and a completely unknown future, knowing those Bowdoin friends are still with me even if I’m not there with them.

Last night, I went out with some new friends for my first canelazo — a traditional drink in Quito made with naranjilla fruit juice, sugar, cinnamon, and rum that is served hot. It is sweet and citrusy, and deliciously warm in your belly on a cool mountain night. We followed the drink with some dancing at a nearby bar, where one guy was dancing so intensely with a some girl we could barely take our eyes off of his butt (hehe), which seemed to be perfectly coordinated with the beats of the blasting reggaeton music. It felt sort of like being on an episode of “The Real World” because, not only were ladies able to get into every loud pulsing bar before 10pm for free, but the drinks were free too! I mean, when drinks cost $1 to start, that is one cheap night… And that’s a cheap night I can get used to!

I’m trying to appreciate these little moments that are becoming slices of Quito living. Meanwhile, I’ve been getting into much more of a groove. Home feels much more like home now than it did day three when someone was robbed at gunpoint outside my door, and I’ve got a better sense of the city, how to get around, what is open when and where. Each day has more of a flow to it. Life’s been a bit of a babbling brook, with little bumps and rocks snagging me along the way, but I’m finding my current now. Slowly, but surely. I even found a gym (FINALLY ! And let me tell you — it’s true what they say about working out at 10,000 feet — it aint easy! Holy crap, I was breathing HARD. Like, really hard. But man, I can’t wait to get going and see what happens when I return to sea level…)

For all you Bowdoin Polar Bears who are at reunion, do me a favor this weekend: look up. That’s me smiling 10,000 feet above you, remembering the most incredible, wildly hilarious, wonderfully special four years of my life so far… Thank you for ALL of it, and all the laughs to come. But I guess I’m here in Ecuador now. No, it’s not what I expected. Nothing ever is these days.

I thought I wouldn’t miss my five-year reunion for the world, but I guess that is exactly what I’m doing; I’m missing it for the world, for my new world, and ya know… I can’t think of a better excuse than that.

9 responses to “A Polar Bear in Quito”