I would like to end this year of Travels with Tavel with a photo series of my signature Tavel Leap (and some non-leaps or almost-leaps), in chronological order, from some of the wonderful places I was able to visit during the wild and crazy 2010:

This one (above) represents more of a leap of faith that I took, visiting my then-boyfriend in Chicago. Leaps of faith are a whole other kind of Tavel leap, and I tend to take them often. (Even with a bad knee, sometimes these leaps have the roughest landings…) 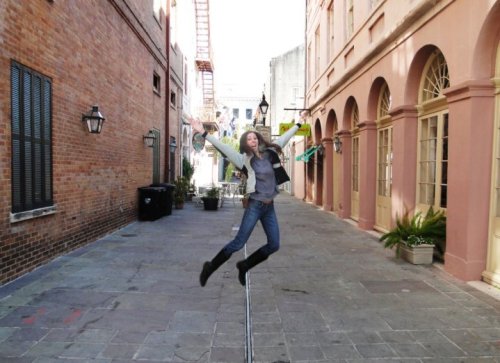 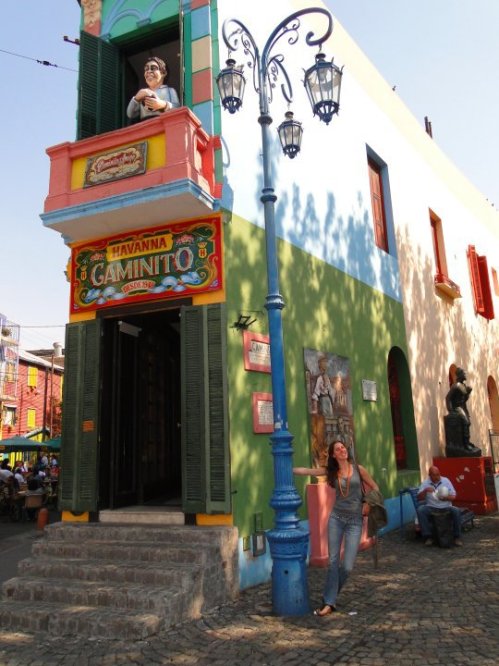 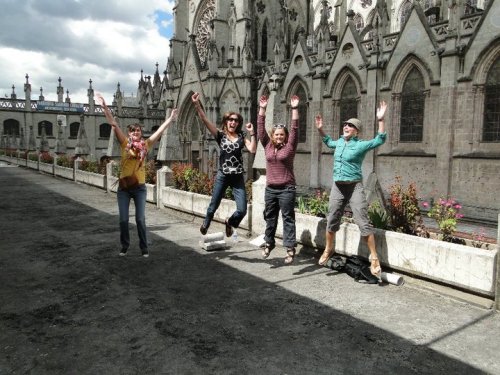 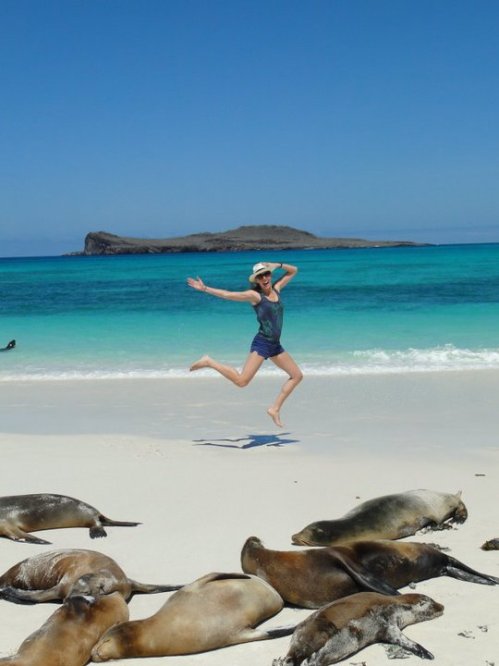 I’m very good at looking back. In fact, I’ve spent countless hours looking back and trying to find meaning in things that have come and gone and left deep marks in my heart and mind. But my personal new year’s resolution is to spend less time looking back and more time looking forward. If I find myself feeling extra Buddhist, I can focus on looking only at the constant “now,” but that might be difficult considering that 2011 will be the first year in a long time that I have an actual long-term plan of attack.

I spent 2010 up (at almost 16,000 ft on Pichincha Volcano and near Cotopaxi Volcano), down (sea level, or even snorkeling below the surface of the sea in the Galapagos), and everywhere in between (in Ecuadorian cloud forests, among Italian ruins, wandering through Argentine streets, and revisiting New Orleans for the first time post-Katrina). I think, like most years, this was a year of ups and downs for me, personally, as well. But I can honestly say it was one of the richest years experience-wise that I have ever had. I learned more than I could ever imagine about people and the world this year, and probably — most importantly — I learned immense amounts about myself and what I want and need.

While my backpacks, suitcases, hiking boots and flip-flops are all put away right now, these lessons, these experiences, these once-in-a-lifetime adventures are neatly packed away in my mind. I am beginning 2011 with such hope, such motivation, and such excitement for all that is possible, and I couldn’t have been where I am now without the rollercoaster year that was 2010.

A happy, healthy, inspirational, wild and wonderful (and maybe even somewhat stable and calm) New Year to you all! As you can see through these photos, not every leap is as graceful as the next (and in 2010 I took some hard spills), but at least I leapt at all.

Thank you for leaping with me.

Putting the “I” in Istanbul

Yes Allison, Lisa and Robo, the Mystery Snapshot was from Istanbul, Turkey — one of my favorite cities in the world. The truth is, I am Turkish. Well, it’s hard to say exactly how much. I am Sephardic. My mom’s ancestors were Spanish Jews who spoke Ladino (this includes my mom’s parents, and she remembers many old sayings in Ladino from her childhood) and were exiled from Spain during the Inquisition. After leaving Spain, they ended up in Macedonia and Turkey. For almost 500 years they lived in a Spanish-speaking Jewish community in Turkey. Half my grandfather’s (abuelo’s) siblings were born in Turkey and half were born in Argentina. My grandmother (abuela) was born in Argentina, but was first generation. My mom was then born in Argentina, and ended up falling in love in the Big Apple. So, when we say that we are half-Argentine, the truth is we are really Spanish by blood, with some Turkish mixed in, and then technically Argentine. And then there’s my dad’s family — his father was born in Russia and spoke Yiddish, and his mother was first generation American, with a family from the capital of current Lithuania, which was – at the time – ruled by Poland. You tell me what I am.

Perhaps in a way, all my traveling is subconsciously about figuring that out. Where do I belong? Where do I feel most at home? What does home even mean to me? Home has been apartments, cities, and countries. But most of all, home has been certain people… 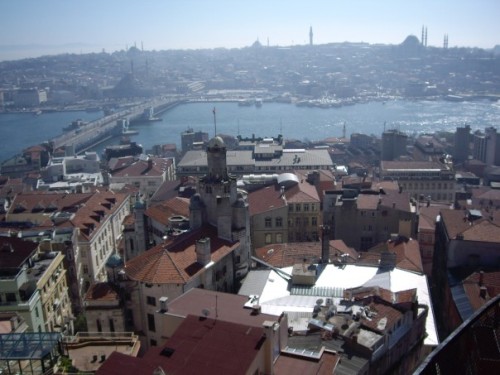 If you’ve ever been to Istanbul, feel free to chime in. Basically, I found it to be incredibly cool and surprisingly edgy. The food was absolutely incredible (ummm, hello baklava every meal) and the salesmen were oddly sassy (“Hello, pretty lady. Come look at my rugs. They are very expensive!”). I was asked for directions in Turkish a couple of times, and found myself barefoot with a scarf wrapped around my head more often than I expected. The blending of old ruins and modern infrastructure make it one of those wonderful time-warp cities like Rome, where you feel constantly like you’re about to trip over an archaeologist’s dream-find yet sufficiently taken care of by modern amenities.

Every time I remember my trip to Istanbul four years ago, I wonder how and when I will go back. There is SO much to see in Turkey that one trip, unless it’s very long, will only scratch the surface. And wow, so much has happened in life since then. At the same time, some things haven’t changed… I would rather not admit those.

As I keep alluding, my days of constant trips have been delayed and, at least for a little while, I will only be able to visit Turkey through my own memories, along with a few scattered Facebook albums and blog postings. But hey, I’ll take what I can get. Especially when “what I can get” includes some pretty delicious baklava right here in my hometown, Manhattan.

Today is a special day.

My baby, Travels with Tavel, has made it to 15,000 hits — thanks to YOU! I don’t know what that means (probably very little) but hey, I’m proud of this vague achievement. Ah yes, a lot of those hits came from accidental Googling by people in India and Ecuador. I do have the pleasure of seeing exactly what searches lead to my blog, and I find it very interesting to analyze.

To give you an idea, here are a few of the recent Google searches that somehow led people from around the world (you can see where exactly on the Cluster Map to the right) to random TwT posts: “farewell tavel,” “strange things,” “are gringas attracted to Ecuadorian men?” “Die Echten Reber Mozart Kugelin” [this is actually the number one search that leads people to my blog, besides numerous searches with typos of the word “travel” without the “r”], “how to become normal,” “the two paths of darkness,” “gun stores in Quito,” “huge rubber boots,” “why are bus seats in Ecuador so uncomfortable” and “why do Lucky Charms make my stomach hurt?” So, as you can see, not everyone is LOOKING for TwT, but I like to think that at least a few of my accidental readers are happy when they get here.

15,000 is a lovely number, so I will celebrate with a good ol’ fashioned MYSTERY SNAPSHOT! A lot of you have been asking me “what happened to the Mystery Snapshots?!” and I’m sorry they ever disappeared. I will be bringing those back, and accepting submissions (yes, please email me, travelswithtavel@gmail.com, your submission and get a shout-out on my blog!). Afterall, you can only tolerate so much of my thoughts on life…

Here is the Mystery Snapshot. Can anyone out there tell me what city and/or what country this might be?

THANK YOU for helping me pass the 15,000th -hit mark. I couldn’t have done it without all of you (yes, that includes you accidental Googlers) and I hope you continue to tune-in as I shoot to have an interesting enough life to earn the next 15,000 hits.

I’ve gotten into a little routine. Whoever thinks “unemployment” means you have nothing to do is incorrect, at least in my case. In fact, I haven’t fully felt the psychological effects of “unemployment” yet because, since I got home from Ecuador, I feel like my mind has been buzzing nonstop in a whole new direction. That said, I am consistently sleeping past 8 am — something that has almost never happened to me — and I am taking longer to sip my coffee in the morning. I read articles I would otherwise skip, and I stay in my sweatpants and flip-flops just a tad longer than I would normally. And you know, it’s quite nice. For now. 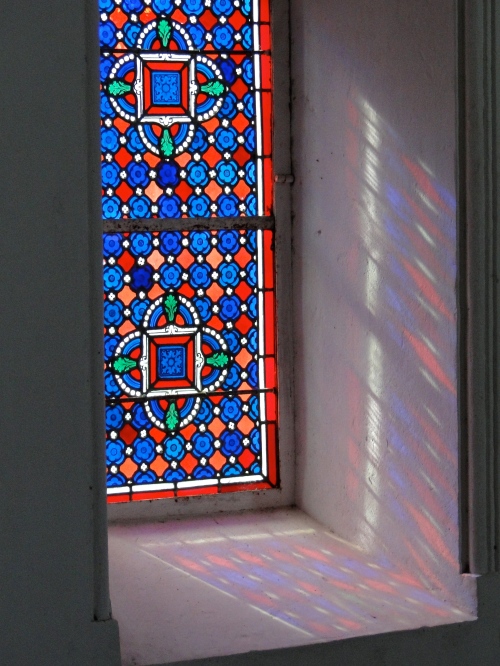 Things are good. I’m going to information sessions left and right for post-baccalaureate pre-med programs (and no, I am not planning on going to med school…), doing a ton of online research, and studying for the GREs. I am trying to figure out how to earn a little money while life is in flux, and attempting a bit of freelancing, which would be really fun to pull off. I have moments of such excitement for my new plan, followed by moments of slight anxiety when I realize how much I have to accomplish over the next six years.

I always thought of myself as someone who could commit to another person very easily, but committing to my own personal career plan is a little trickier. The truth is, I haven’t had a plan beyond a year, or even a few months, since I graduated — by choice, for the most part. I’ve been living life flying by the seat of my pants (did I say that correctly?). I’ve been here, there, up, down, anywhere I wanted whenever I wanted, and now, I’m giving up a little of that freedom to live on a whole other planet for a while — Planet Relative Stability (eek). Giving up the ability to live spur-of-the-moment is a bit scary for a girl like me. But it’s also necessary, and a welcome change of pace.

During the past five and a half years since I graduated, I’ve been living exactly the adventurous life I always craved and wanted. It’s been a dream, complete with ridiculous over-the-top local and international romances, mini-tragedies, and self-discovery. Even though a lot of you keep quiet about what’s going on in your lives, I know I am NOT the only one out there who has been on a wild and unpredictable ride these last few years. And, although I don’t plan to fully leave the adventures (and romances) behind (EVER – although just one long romance would be ideal), I’m happy to step off the rollercoaster for a bit to allow some other doe-eyed new graduate with better knees to get on. (I’ve already warmed up the seat!) I’ve got those chapters of my memoir covered. Now I’m just trying to set up the next ones. Boy do I think this is going to be a good book! 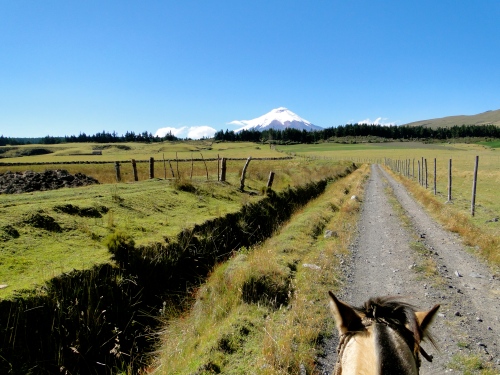 If I’ve learned anything, it’s that even the best plans are packed with mystery. The fact is, I wax and wane between being totally overwhelmed with what I want to accomplish over the next few years, and completely excited. (I’m not alone on this – right?!) But that’s the beauty of being 27 and never knowing what’s next, no matter how much you try to plan. While maybe, occasionally, I admit that it can be completely intimidating (yes, that is how I feel right now), it’s also pretty exciting to build mountains for myself to summit. But standing at the base and looking up, well, I can safely say that yes, it can be scary. But when was the last time  fear stopped me from doing anything?