I Should Be In Africa

First, I just want to say THANK YOU (…SO much) to everyone who reached out to check on me over the past couple of weeks. Thank you for all the comments, the emails, the little messages, the love. I think we killed the amoeba together, and I’m slowly trying to get back to normal. I might even go on a 5 hr hike at over 4,000 meters this weekend! (Hmm.) Can’t tell you how happy it makes me to know that people are tuning into TwT, even though I’m far, far away from most of you.

Well, first, I have to post this song, because you literally hear it every five minutes here. I’m not sure how much play time it gets in the US but, whoa…

Oh, oh! And this one… They LOVE it here. It’s also got a lil’ Latin flair…

Love ’em or hate ’em, these two songs are the soundtrack to the World Cup in Ecuador, which is in full-swing and getting more and more controversial and exciting. Today is the final Round 1 Argentina game!! I am PUMPED. However, tomorrow is probably the biggest game of the World Cup so far. OK, maybe just for Americans, but I think a lot of people will be watching because this game is about fairness; it’s about right and wrong, the history of US soccer and, in a sense, the future of US soccer. For America, this is really OUR World Cup. If we win this game, we advance. We beat the skeptics. We prove ourselves. We win.

This is it. During the last game against Slovenia, the US pulled out one of the biggest moves yet; they came from behind and rallied to score three goals when they were down 2-0! But, a very unfair and questionable call by the Malian referee left many of the American players and fans “gutted.” Some wins are earned and some are taken; this was a win the US earned, with all their hearts. They played their asses off, they surprised everyone for the second time in a row, and they WON. But, their victory was stolen from them. Just like the US vs England game: even though it was a tie, the US won and England lost. Everyone knows that. It’s going to be very interesting to see if USA comes out onto the field against Algeria tomorrow with guns blazing or their tails between their legs. But, if I know my country and if I know Americans, they are going to BRING it. (I love you Bocanegra. Mmm, mmm, mmm!) It should be a lot of fun.

In honor of the big US game tomorrow, I want to introduce guest blogger Geordie M. who managed to attend every US game of the last World Cup without having tickets in advance. If anyone understands my excitement for this tournament, it’s him. Enjoy.

I should be in South Africa right now. I’m breaking a promise I made to myself right after spending the 2006 World Cup in Germany, one of the craziest, oddest and most memorable couple weeks of my life. Among many other things, I got a place to stay and guided tours of the town of Essen from some guy I met on the internet, scored a 75 Euro (holy f! that was cheap) ticket to the US-Italy game, played soccer in a park with German middle-schoolers, watched Japanese and Croatian fans get rowdy together, and I got tickets to all three US games. It was incredible. I left convinced that I’d be back in 2010. It had been too amazing, too huge, too incredible not to do again.

Well, I ain’t got the money. Simple as that.

I tried to save, but life intervened. Bummer. I have some friends there and, ughhh, it pains me. So jealous. Because, well, the World Cup isn’t something you can quite understand until you’ve been there. It’s not the Olympics. It’s not the World Series. It’s not big time college football. It’s a month long international party, with a clear beginning middle and end. The rivaliries and passions are real, to be sure. But that doesn’t stop people from having post-match parties, drinking beer, dancing. It’s like all the joys of summer vacation, studying abroad, a night out at the bar and Super Bowl Sunday combined into one. There is literally nothing like it. I would give anything, ANYTHING, to be there right now (excuse me while I sigh grind my teeth, and bang my head against the back of my chair).

A few highlights and lowlights from my experience in Germany.

I’m rolling down the highway with my friend Andreas to go see the US v.s. Italy Game. Clear, sunny day, rolling green fields, American flag flying from the back of the car. People honking at us as we drive by. Went to the stadium hoping to score tickets, willing to pay 300+ Euros, and found some ladies who unloaded TWO tickets for 150 Euros. (Are you kidding me?) Hundreds of people trying to score tickets and I not only get them but get  them for so cheap that I genuinely feel bad.

Score tickets to first US game (USA v.s. Czech Republic) literally minutes before kick-off. Went from “fuck it, let’s go back to town” mode to “holy shit we are inside the fucking stadium and fucking watching the match. A-holy fucking shit.” And then they lose. Badly… 3-0. English fans taunt us as we leave the stadium. Two hours ago, total elation. Now 200 Euros poorer and feeling like shit.

USA v.s. Italy. I get my incredibly cheap tickets. Gorgeous day. Just fucking so pumped that I got to TWO games through shear luck. Watching Italy warm up. So close to the field. I am THERE! Singing national anthem with huge US contingent. Italy scores then US equalizes (on an own goal, but whatever). End of game, Italy down a man, US down two men, field looks about twice its normal size. US goalie makes improbable save after improbable save. US scores but WHAT? OFFSIDE?! REF, YOU’VE GOTTA BE KIDDING ME! Last twenty minutes. Panicky. Naseous. We somehow hold on for the tie. Players come over to our section and we clap. Later that night, we go back to Andreas’ apartment. I put on a flag as a cape and dance around the apartment singing patriotic songs. Giddy. Euphoric.

Geordie dancing with US flag. Germany 2006.

Third US. Game. They need a win to advance. Ghana. Things are going OK, but gradually fall apart. We lose. Really sad. Stay in stadium until almost completely empty. Can’t believe it’s over. Time to head back to France (home at the time). Book train as quickly as I can and get the f- out. 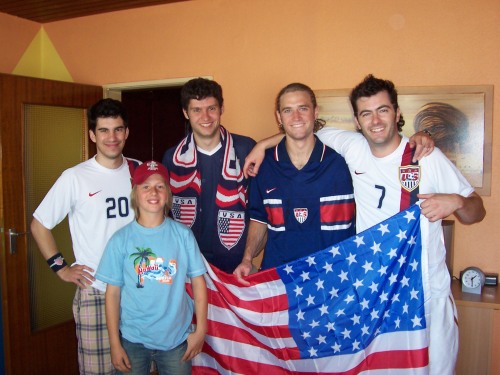 Geordie with fellow US fans. Germany 2006.