A Moment in Amsterdam

I woke up this morning to an unexpected text from one of my best friends in the world, who happens to live on the other side of it. She was falling asleep in Oahu as I was waking up to a crisp yellow light here in Manhattan. Hawaii Heather, as we call her, asked me and the other girls who became best friends in college if we ever miss Bowdoin. I hadn’t heard from Hawaii in months, and hadn’t been thinking about this question, but my answer was a quick and simple: YES.

I’m nostalgic by nature, but mostly because I have a really good memory. Sometimes I wish I would forget some happy memories, because they were too good. We began listing the things we miss the most — how we haven’t laughed as hard and as constantly as we did while all living together in college, how we’d spend this time of year throwing each other into huge crunchy leaf piles while walking across the neon-colored Maine autumn on the quad, and then spend the next hour cracking up and pulling scraps of leaves and twigs out of our fleece and hair. We remembered life before broken hearts, before worrying about money, before it all got so complicated, before there were scars and challenges that we would have to get through on our own, without each other to dance around the dorm room with during our nightly 11:11pm dance parties (which would begin promptly when someone yelled “It’s 11:11!! DANCE PARTY!” and then everyone would have to drop the work they were doing, run into the hallway, and dance like crazy. The boys downstairs would sometimes run up and join. Hehe). How does it get better than that? During reading period, when it snowed like hell, we’d sneak a bucket of snow into the dorm giggling, and then start throwing snowballs at people (indoors) before it melted. Indoor snowball fights and 11:11pm dance parties seem to be two of those things that came and went with college… Replaced by what? Happy hours after work and friends’ engagements?

We’ve all found happiness in many different forms since college, but man… what a good fucking time that was.

In honor of this golden-hued time of year, when another season change reminds us of the world moving quickly under our feet, I’d like to go back to an October weekend I spent in Amsterdam. The past couple of weeks have been pretty rough (academically), so there is nothing I want more than to make a quick run for it… at least via TwT.

Purple glass on a canal house in Amsterdam.

A few years back, I traveled to Brussels to visit my friend Dawn, who was living there as a Fulbright Fellow. We quickly packed the bags under my eyes from my overnight flight and headed straight to Amsterdam via train. I quickly fell for the city, and definitely want to go back.

It’s raining and cold outside, and the grey has yet to subside, but I have returned from Amsterdam a happy Tavel, with a stomach full of hearty Dutch food and even more chocolate; I can’t really complain. Amsterdam was… gorgeous — more than I imagined it would be. The sky was constantly a wintery white, but the city was lit up by golden leaves that both fell from the trees and floated in the brown water of the many canals, which sat underneath bicycle-covered bridges crowded with old wooden boats. My immediate reaction to Amsterdam was postive, and that feeling never faded. 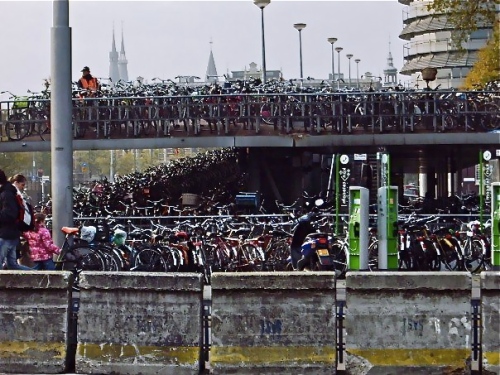 The first thing Dawn and I noticed when we got out of Centraal Station was the bicycles. Oh. My. Gawd. Imagine the most bicycles you can fit into a your frame of vision, and then double it. The dominant and obviously preffered method of transportation in Amsterdam is le bicycle. This was quickly proven by the aggression of the cyclists and the piles of parked bikes lining every sidewalk, bridge and street. Also, there are bike lanes on every road — lanes much bigger, proportionally, than the car lanes, and triple the width of the pedestrian walking-lanes. Bikes come in all different colors, some with wheelbarrows or kiddie-seats attached, and some decorated in flowers, leis, or junk. It was quite a site, and I was very impressed by the multi-tasking skills of every man, woman and child who rode around with the self-assurance and confidence of a truck driver.

Then, there were the canals. Ahh… the canals! SO beautiful! For those of you who don’t know this, Amsterdam is comprised of several concentric canals, with gorgeous curving bridges passing over them. Below, row boats and house boats in all different colors and styles float effortlessly on the quiet canals. Each is separated by streets full of “coffee shops,” stores, restaurants, and galleries.

Dawn and I wandered our way over several canals, dodging bikes and trams and falling leaves, to the Van Gogh Museum, which I highly recommend. In college, I wrote one of my first major papers analyzing Van Gogh based on only two of his paintings (his “Bedroom in Arles” and “The Night Cafe“) along with his letters to his brother, Theo, about those two paintings. Along the way, we noticed many canal houses that seemed to sit assymetrically against other homes, as if they were falling out of the tightly bound sidewalks so slowly that almost nobody noticed them. Little by little, I began to see this more and more. It wasn’t until I found myself face-to-face with Van Gogh’s painting of his “Bedroom in Arles” that I realized how similar Amsterdam is to that specific painting. Like Van Gogh’s painting of his own tiny bedroom, Amsterdam is completely comprised of skewed perspectives and idiosyncrasies that challenge physics and add a certain fragility to the atmosphere.

After the museum, we hopped onto a perfectly-timed canal tour boat. Looking at Amsterdam from the canals themselves was an interesting and unique angle to take it all in. There really is no other way to feel a part of the city.

Finally, we were off to the Anne Frank museum, built in the exact location of Anne Frank’s home during her two years of hiding. This was one of the most important things for me to see, and I have to admit that I got a little choked up. It was really touching to be touring her house, lined up between German, British, and Israeli tourists, after reading her diary as a kid. There we all were, in her tiny bedroom where she was forced to stay, only to get taken to a concentration camp once her family was betrayed, and die of typhus one month before she would have been liberated, just after her mother, father, and sister’s deaths at the Bergen-Belsen concentration camp. There I was, as a young adult in Amsterdam, in the very room she wrote the diary that I would later read. It was one of those moments when travel collapses onto itself and becomes something else.

Ceiling full of flowers at the flower market. Amsterdam.

I left Amsterdam a big fan of it’s off-beat, yet sophisticated personality. It’s a city where you can walk down the street and see scantily-clad women watching you from the flourescent windows of the Red Light District, where you can go to a store called The Magic Mushroom and choose what kind of drugs you want to buy right out there in the open, and where you can get around the city by boat OR bicycle better than by foot.

Yet it is also a very modern and unique city, with a complicated history but an open mind. Like Van Gogh’s painting of his bedroom in Arles, there is something quirky about Amsterdam to which I connected, but also something surprisingly quiet and relaxing about it all, that I found very comfortable.

It’s been years since I was there, but amidst this crazy new life I have, at least now I feel a little bit like I’ve just gone back.

Oh, and you might notice some familiar faces in this music video… which I got to be in last November… 😀 Shout out to the lovely Samantha Farrell!

Filed under A Moment In..., Amsterdam, Autumn, Life Stuff, Uncategorized

4 responses to “A Moment in Amsterdam”