The Boy from Dorchester

I woke up with a heavy heart this morning, thinking only about the 8 year old boy who was killed in yesterday’s Boston Marathon attack, and how his family must feel today. It’s all too familiar a feeling, after spending a day in the MGH ICU last week with one of my best friends and her family after her sister was killed suddenly and tragically in a head-on collision. Her 7-year-old nephew is doing remarkably well after breaking his back in the accident. There were many other victims in yesterday’s attack, but I can’t get the little boy and his unsuspecting innocence out of my head.

Maybe it took a deep sleep to really feel the weight of what happened here in Boston yesterday, but it’s hitting me more now than it did last night. This explosion was powerful, cutting through more than just flesh: it instantly severed limbs (two brothers who were standing side-by-side, next to the boy, each lost one leg), it shattered happy moments that had been built from determination and hard work (that little boy from Dorchester was killed just after hugging his father at the finish line — his sister lost a leg, his mother had to have brain surgery), and the piercing dagger of terrorism went right through the heart of so many others, without directly touching any of them — at least not physically. This was a horror that was both completely unexpected, yet eerily familiar (cannot help but be reminded of September 11). As a New Yorker, I walk around my city with an almost constant awareness that an attack could happen at any given moment. It doesn’t stop me from going anywhere and it by no means rules my life, but it doesn’t leave me either. I can’t say that I walk around Boston with that same awareness, but yesterday I had to.

I noticed a little spike in TwT hits yesterday afternoon, so for those of you who were trying to get a sense of where I was and what I experienced, here is my little inconsequential story.

At around 2:30, I left my apartment to head to Harvard Square, where I was planning to cram for a big 5:30pm midterm. It’s about a 20-25 minute walk to campus, so I was literally feet from the Harvard Science Center when the explosions occurred at 2:50pm. All around me, marathoners walked (or wobbled) with their families and friends, glowing with a palpable air of satisfaction and exhaustion. A friend messaged me asking if I knew what the explosions in Boston were all about. My heart sank just a little, so I quickly checked Twitter from my iPhone. The first Tweets about two explosions at the finish line had come through, but nobody knew anything. It must have been 2:52pm.

I headed right for the computer lab, where I was planning to quickly print out a study sheet I had made for my last-minute cram session. When I got to the computer lab, nobody was checking the news. I got on CNN, where bits of news were quickly being assembled. The guy next to me noticed my screen. He let out a quick “Oh my God… what the hell happened?” The woman next to me started receiving text after text. She later took me to her Facebook page to show me the picture she took an hour or so earlier at the finish line, in front of the Indian flag, right where the bomb exploded. Two other women in the 5-person media lab room began crying as the news trickled in. “It’s just so horrible!” one of the women said, between little outbursts of tears. The first images I saw were of actual limbs scattered across a bloody sidewalk. The photos were raw and unfiltered, un-described just simply posted and shared by people quickly trying to wrap their heads around what had happened, in its horrific brutality.

At around 3:30, I got an email from my professor that class, and our 20%-of-our-grade midterm, was still on. After what had happened to my friend’s family earlier in the week, I had had trouble focusing on the Respiratory, Urinary, and Digestive systems, but after serious studying over the weekend, I felt confident in what I knew. Suddenly, I looked at pictures of slides and pages of notes, and it all meant nothing. My mind was somewhere else completely. Everything I had crammed into my brain was suddenly gone, and replaced by an adrenalized need to understand what was happening, and make sure my friends were ok.

Earlier in the day, a friend called, inviting me to watch the Marathon with her and another friend. It was so incredibly tempting that I seriously considered it, but I knew I was really behind in my studying and needed that time. “Come on Tavel! We’re going to grab lunch, then get a couple beers, and then we’re going to sit and watch the runners go by! It’s Marathon Monday in Boston, you’ve gotta be there!” I looked at my notes, and I looked at the time (it was around 10:30am), and knew in my gut that I just had to keep studying…

Reluctantly, I turned the invitation down, wondering if I was being too responsible considering I had already gotten into grad school, but knowing I was being true to myself and what felt like the right thing to do. If I didn’t have a midterm last night, there is no doubt in my mind that I would have been there, at the Marathon, watching the runners go by.

At around 4pm, the sirens started swarming the area, and Tweets came in that there was a suspicious package and possible bomb found at the Harvard T stop, about 100 yards from where I was. Then, we heard on a loud-speaker that the police were shutting down Brattle Street, the street that intersected with Church Street (where I was) because of undisclosed suspicious activity. That’s when things felt a little more real, and for a moment, I worried that we might be in the wrong place at the wrong time. Armored vehicles, ambulances and police motorcycles swarmed the area, but within 10 or 15 minutes, an announcement came through that, thankfully, these were all false alarms.

How was I supposed to take a 2.5 hour midterm after all this? My mind was in a million places, but not in the large intestine or alveoli, where perhaps it should have been. About 45 minutes before my midterm, we got the email that class had been cancelled. My class is full of nursing students and EMTs who were planning to work extra shifts because of the tragedy. Then, the email came from Harvard that all classes were cancelled. When T service is interrupted, life is interrupted.

Playing the guitar over The Charles River. Cambridge, MA.

By 5:20pm, the announcement came through that they were going to shut down the building I was in, and everyone had to go home. I met up with one of my classmates and we walked home together (I believe in the buddy-system), not through campus like we usually do, but around campus — the long route — just to be safe.

That awareness that I mentioned, when you have to walk around with the realization that you’re not as safe as you thought you were — that’s terrorism at work. Events like the one yesterday make us feel small, and somewhat helpless in a much bigger, more aggressive and complicated world. But today, despite the tragic reality of what happened yesterday, I will try not to allow that feeling in. That’s how terrorism wins. Terrorism takes away our shields, but it doesn’t take our swords. 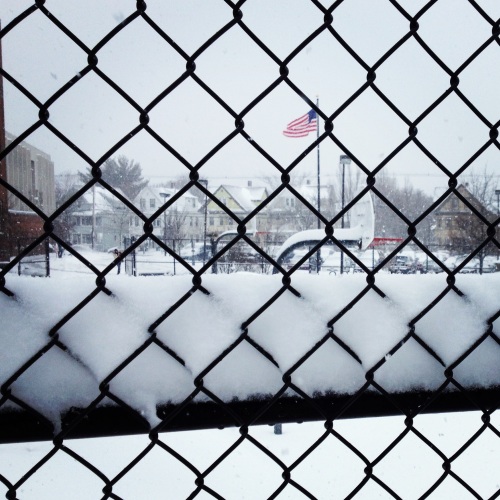 Today, rather than focus on the terror and heartbreak of what happened yesterday, I will try to focus on how proud of his father that little boy must have been when he hugged him at the finish line yesterday. And how tragedies such as this bring so many people, from strangers to entire cities, together.

8 responses to “The Boy from Dorchester”