It was time to leave the city. A slight coolness in the air coupled with the constant threat of drizzle kept bikinis and towels at bay, but M, M and I were headed on a little North Shore adventure, and a little rain couldn’t stop us. In fact, it was a quintessential New England day — unapologetically overcast, a bit dreary, but promising, nonetheless.

Despite living in Somerville for a couple months now, I had yet to feel the rugged charm of the New England coast. It’s still summer afterall, and honestly, I couldn’t stand the wait anymore. Luckily, a friend suggested a little day-trip adventure to the North Shore (the “Nahth Shahr” — does that sound like a Boston accent when you say it? Well, SORRY, I tried…).

The day would begin with a lovely ride out to Essex, where we would kick things off with the most New England-y summer-y thing I can think of: fried seafood, lobster, blueberry beer, and Chardonnay at Woodman’s — an old school North Shore restaurant that began with Lawrence “Chubby” Woodman’s fried clams in 1916. When we arrived, we pulled into a parking lot beside a little creek, where people quietly kayaked by, and the sky stayed safely on the brink of not-raining. As we rounded the entrance of the restaurant, my big plan to devour obscene amounts of fried seafood was quickly replaced with my summer bucket-list goal: lobstah. Tough life, I know.

I chose my little lobster, grabbed a bib, a dish of butter, and some packets of wet-wipes, and headed into the restaurant. It was only slightly after noon, but our plates were stacked high with lobster, onion rings, fried clams, fried shrimp, and fried lots-of-other-stuff I couldn’t exactly identify. It felt like we were in the restaurant of a ship, docked at the shore, eating amongst the North Shore’s LL Bean-clad locals as well as the ship’s staff. Sure, I didn’t feel like I looked the same, dressed the same, or ate the same way as the rest of ’em, but a plastic cup of chardonnay and a sip or two of Sea Dog’s Blueberry Wheat beer brought me back to the Bowdoin days in Brunswick, ME, where I always felt oddly at home. Maybe it’s my partially New England blood… Honestly, between the company, the food, and the in-your-face-New-Englandness of the place, I couldn’t have been happier.

Sitting by the Creek. Essex, MA.

Once you stuff your face with that much seafood, it is important to sit like a fat piece of lard on a wooden bench by a creek. So, that is what we did. The glow of summer’s first lobster, and of course the chardonnay, had me in a happy and light summery place. In fact, I was happy as… a clam. Har har. (GET IT?! Too obvious, huh?)

The day continued with a trip to the Cape Ann Museum in Gloucester, which had a beautiful courtyard and exhibits that stuck to the theme of the day: you guessed it — The North Shore. If you’ve never gone to a museum slightly tipsy, you should try it. Just don’t touch anything… And try not to giggle too much. (Oops.) 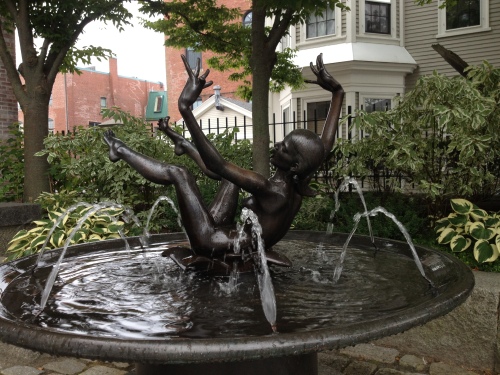 It was a matter of time before the sky gave in, and rain drops escorted us along our walk through the adorable coastal town of Rockport which, over a hundred years ago, was used primarily as a source of timber for ship building (as well as fishing, obviously), but is now bustling with strudel, fudge, bikini, jewelry, and pretty adorable one-of-a-kind ice cream shops.

Doggy in a Window. Rockport, MA.

It felt appropriate to be in my black, Gortex rain jacket as we strolled through the town, to a pier where we spent a good 45 minutes or so just savoring the sea, the boats, and the jagged rocks sprawled out beneath us like a bunch of still, bathing sealions. 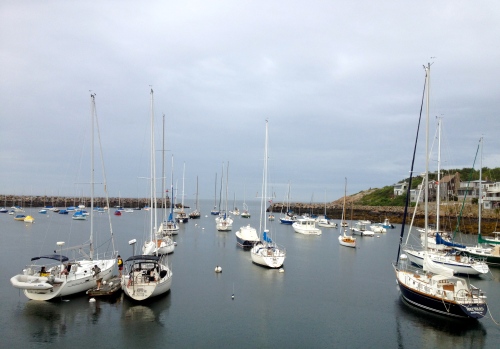 The day was satisfying in a way that cannot be planned; good people, hearty local food, and the rugged mix of fishermen and wealthy New England vacationers swirled me into a North Shore swoon that took me as far away as I needed to be for the day, despite barely having gone anywhere. 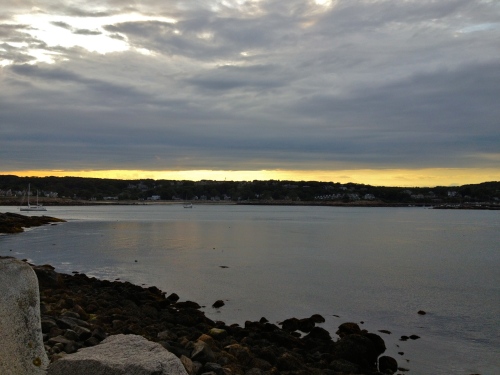 Every now and then, when you travel (it could be near, it could be far), something happens that reminds you to appreciate the people you’re with, the day you’ve just had, and the moment you’re all in. Just when we thought a good day was ending, as we drove away from Rockport, we caught a quick glimpse of a rainbow springing out from behind a cemetery.

Yes. A fucking RAINBOW. So, M — our lovely driver and the mastermind behind this trip did something that I think most people wouldn’t do. Without discussing it, he made a very quick decision to pull over onto the side of the road, and stop the car. One by one, we got out, ran a bit carelessly across the road, stood beside the brick wall to the cemetery and looked at the large, beautiful rainbow that streamed mysteriously out from behind the trees.

Sometimes, these things just happen; people click, places and timing click, everything stops. And when they do, you’ve just got to pull over and look at the f-ing rainbow that forms. Because it’s beautiful, isn’t it?

Since finishing summer classes last week, I have been trying to balance my desire to completely veg out and have daily Madmen marathons with getting my grad school applications started… and exploring the restaurants, bars and cafes of Cambridge as a free woman (OBVI— it’s still me over here, people — even if I know a thing or two about quantum physics now).

For better or worse, my urge to be productive always beats out the urge to be lazy, but a gal can TRY once in a while (I’ve found it doesn’t take much). I’ve already made a lot of additions to the very elaborate grad school application spreadsheet I’ve been maintaining, and I may or may not have written a rough draft of my personal statement essay in one burst of inspiration (now that I finally know the topic). I’ve registered for fall classes and labs, run around town rushing health insurance documents out before quickly approaching deadlines, and I’m working on volunteer, or even potential paid PT Aide positions for the fall. I guess getting some free time these days doesn’t directly translate into “vacation,” but there is something to be said for having the time to catch up on all the OTHER stuff we have to do to stay organized. Of course, there is a lot more to do — it’s called being an adult, and you all know what that’s like — but the best complement to hard work is easy fun. Lots of it. That’s how I feel about THAT.

Luckily, I have some great friends who have been treating me very well and introducing me to new places to celebrate being free, or just enjoy the simple things about summer (sitting outside in the afternoon with a Hefeweizen, strolling by the river, impromptu oysters, and sangria…). It’s time to pause and acknowledge a few more of these places, and add them to my TwT Boston list. [Warning: I have discovered Instagram (I was slow to warm up to it), and I’m not afraid to use it…]

EMMA’S:  There was something special about this place from the moment we first walked in. I’m not sure if it was the Indie-vibe, the dim lighting, or the extremely friendly host (who even moved us to a better table after seating us at one, acknowledging his own preference for the second table and aiming to please two already content customers). The cozy spot is like a hug from a best friend; you get the comfort of delicious thin crust pizza (with the usual spattering of toppings to choose from — and even some unusual options, such as dried cranberries, artichoke hearts and sweet potatoes), accompanied by the edge of a good sangria. Meanwhile, the kind of music that breeds nostalgia plays just loud enough in the background, making one of the colorful chairs an easy place to get comfortable. Emma’s is a great low-key date spot, but it could also be the dinner sanctuary that you run to in the middle of a cold winter, when you want a badass pizza and a good glass of red wine before turning in for the night and watching movies. Pencil me in for many more visits and slices as the temperature in this town slowly drops. I’m not sure who Emma is, but I think we should be friends.

FLOUR BAKERY: Before leaving New York, I wondered outloud where I might find a good bakery in Cambridge. My friend looked at me and said one word: Flour. The name remained a distant fantasy, as I found less and less time and more and more need to treat myself to something yummy during the nonstop cyclone of physics work. At long last, I got to go there today, and I haven’t stopped thinking about my breakfast since. While not in the most scenic spot (I went to the one between Kendall and Central Squares), the cafe itself is just right for a constantly coming-and-going ground. I tried the breakfast sandwich — a surprisingly artistic souffle-like square egg on a delicious homemade roll, with just the right amount of dijon mustard, arugula, and a slice of tomato. I opted for bacon (it always seems to win the ham vs bacon battle) and even the bacon was a standout on its own. But the constant dilemma of savory vs sweet had me in a pickle, so I decided to share (I promise!) the seductive sticky bun as well. It may have just been the best sticky bun I have ever had. Somewhere between that egg sandwich, the bacon and the sticky bun, I found myself lost in a perfect breakfast. I guess all I can do now is go back and sample everything else on the menu, one delicious treat at a time… Who’s coming with me?! 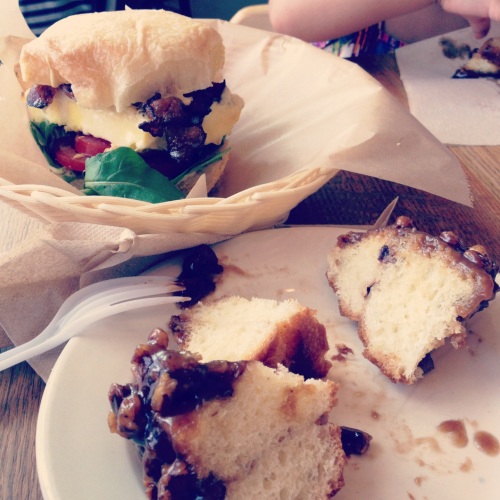 THE CHARLES RIVER: For me, “The Charles” has always been synonymous with “rowing.” Rowing rowing rowing, Head of the Charles, and rowing. Most of my trips to Boston during college were to cheer on the Bowdoin crew as it raced (and sometimes won) “the world’s largest 2-day rowing event,” according to the HOCR website. But only recently did I have the opportunity to walk beside it as afternoon and evening slowly blended together. Seeing sailboats and the river in a slightly different light, in a slightly different mood, with a slightly different life made me appreciate it in a whole new way. For me, nothing does it like summertime strolls by the water… And maybe a little booze wouldn’t stop this moment from getting even better.

As you can see, I’ve gotten some stuff done, and I’ve purposefully NOT gotten some stuff done in the past week. We talked a lot about balance in physics this summer — from the constant forces acting upon an object in static equilibrium, to the force of microscopic photons bouncing electrons off of things (ok, so I may know a little more about this than it sounds like I do, but you don’t strike me as the physics-loving crowd…). What I hope to accomplish with the last few weeks of summer — my entire summer, in a sense — is just more of the same; I want to be productive, but also be completely and totally, beautifully, wonderfully unproductive once in a while. Is that too much to ask?

In life, it seems we must always choose between savory and sweet, or try to balance the two. And then sometimes, we don’t get to choose at all.

(This song has been stuck in my head since my last workout…It is just the right amount of angry.)