In Love in Lisbon

(That’s what I call the most recent mystery photo.)

Congratulations Dawn R., Geordie M., and Tom H…  Lisbon, Portugal is correct! But good observations everyone else, and thank you all for participating! If you look closely, you can see the Portuguese flag, which was my subtle hint.  The photo was taken during my first hour in Lisbon and was a quick reminder that I was back in Europe.  Coincidentally, it was featured exactly one year ago (I now realize TO THE DAY!) as the “Postcard of the Week” on this website: http://www.gadling.com/2008/07/18/postcard-of-the-week-in-love-in-lisbon/.

Lisbon was an interesting city. I expected a very unique atmosphere, but I constantly felt as if the real Lisbon was being protected from visitors, as if we wouldn’t understand it so why give itself away? I left  the city with more curiosity about it than when I had arrived.  Here is a little reaction to Portugal that I wrote shortly after my one-week trip in March, 2008…

A Sip of Portugal

My impression of Portugal feels somewhat unfinished and raw, like paint that’s slowly drying in a distant room. I am not 100% sure what to make of it because I feel as if I have only been able to skim its surface. Like paint setting, the color has been chosen and the work has been completed; all I can do now is sit and wait for it to dry.

I think I needed more time to wander the misleadingly muted streets of Lisbon before I could confidently distinguish it from other cities I have seen. Maybe my trip  was a milestone in my world travels. Maybe I can no longer see one country without comparing it to another.

This seems unfair. Especially for Portugal, a country that may appear small compared to its neighbors, but it was from the beaches of this slither of Europe that some of the world’s most famous navigators “discovered” the “New World!” (Easy there, I did use quotation marks…)

A butcher casually carries a large portion of a cow to his butcher shop.

As I walked from the hotel towards the commercial center of Lisbon in a sleep-deprived daze [note that this is when I came across the Mystery Snapshot lovers], I had trouble seeing the city as its own entity. The closer we got to the water, the more I was reminded of Spain — in particular, Barcelona. I had to keep telling myself I was in LISBON. Maybe I expected it to be rubbed in my face. The city kept unraveling under my feet, and yet I had so much trouble feeling like I was there, nowhere else.

As I walked, I was reminded of Brussels in the way the trees obscured the buildings behind them. I inhaled the sea breeze of Barcelona and noticed similar ironwork on every balcony. And in the open plazas, with their beautiful sculptures that seemed too unkempt to be European, I saw Buenos Aires. At first, I couldn’t see Lisbon without seeing one of those three cities.  But it was only day one; I still had a lot to learn.

I probably learned the most about Portugal during meals. (Hey, I’m not complaining!)

Let’s just say that I was never disappointed, and sometimes over-satisfied (unbuttoning-of-the-pants became routine at dinner, usually before even seeing a main course!). Immediately upon sitting down at a table, waiters would float around us in a choreographed dance of deliciousness. One by one, they placed dishes of sautéed mushrooms and cheese (served in its own bowl-shaped shell) beside baskets of homemade breads and dishes with olives and herbs. A circular top was always cut out of the cheese, which melted temptingly inside, and once opened, would reveal a hot and creamy, off-white bath of sheep’s milk cheese whose warm aroma came in varying degrees of sharpness. Bread basket after bread basket, we’d fill up on the heavenly cheese like it was the only food we would be served. Oh, how wrong we were…

The interesting thing about eating in Portugal is that we were never warned how many courses they would serve. Each meal delivered a one-two-punch of savory delicacies, from seafood and pasta to duck and pork. Much to my vegetarian younger sister’s dismay, octopus – suction cups and all – was consistently in the mix, which we bravely devoured at every meal, but I think it was only a “when in Portugal…” habit.

Another highlight was the architectural details of the palaces and monasteries we encountered, both in and outside of the city. I’ve never seen such a playfulness in the tiles and facades of regular homes. Some of the most memorable places we saw were Queluz (“what light!”) Palace, which had the traditional Versaille and Topkapi elegance, but then there was the Palacio de Pena, which was much more funky and Gaudi-esque. More on those another time… 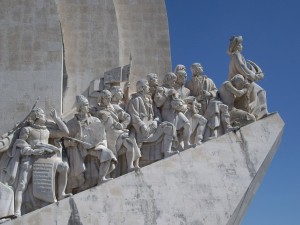 After leaving Lisbon and the metaphorical “paint” has dried, a few characteristics now strike me as undoubtedly Portuguese. Aesthetically, I truly enjoyed the colorful tiles (mostly blue, green and white) that adorned the exteriors of numerous buildings. I found the Portuguese people more friendly and open than the average European I have encountered in other countries. I loved their pride – their constant assertion that THEY are the country from which the rest of the world was “discovered” and explored, that THEY were the ones who first began the tradition of afternoon tea (which was claimed by the British), that THEIR language is as important and significant as any other (and evident in many of the words we use today, even in America). They want to educate the world, set the record straight, and fortify the respect they so strongly believe they deserve. And, let me tell you… if you ever taste a pasteis de Belem, a custard-filled pastry that I HIGHLY recommend, you will have no problem respecting the Portuguese. Mmmm… 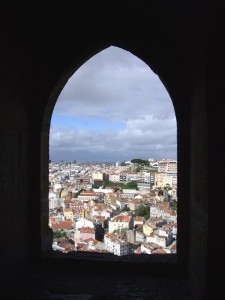 Maybe Portugal has a tiny chip on its shoulder. It reminds me of Cataluña, how they feel they must assert and maintain their language and culture despite the pressure from the rest of the world to make everyone’s life simpler by diluting it with Spanish, French, German or English. Lisbon seemed a little rougher around the edges than some of the more gleaming, proud European cities (like Paris, Rome and London — possibly the three most obvious ones), almost like a child who had been bullied and grew up stronger, covering up its insecurities with thick skin and a veil of resentment. 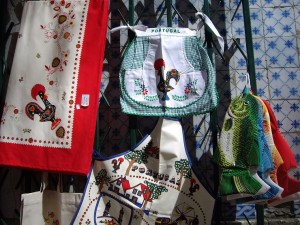 I liked that I wasn’t forced to remember that I was in Portugal every second, that it was a little bit grittier than I expected, and less obvious. Every time I turned around a nondescript dark corner and peeked down another gorgeous, narrow, cobble-stoned street, I was taken aback by the sinister elegance of lanterns shimmering against old stone walls, and homes that never tried to look pretty, but were always beautiful.

Lisbon has all the elements of a sophisticated European city, except it’s left the bragging rights out. And just like the delicious, burgundy-colored port wine that melts you helplessly into your heavy wooden chair each night, I found the place to be quite wonderful, and obscurely refreshing.

A rustic lantern hangs from a colonnade near the commercial center of Lisbon.