Wow, it appears I stumped everyone with my mysterious photo of a large, architecturally ambiguous grey church. Your observations and guesses were actually very interesting! It made me realize that we see things very differently when we alter our expectations.

Well, there are no winners today but, regardless, it is time for the REVELATION!

The mystery snapshot is of the Basilica de Nuestra Señora de los Ángeles (“Our Lady of the Angels”) in Cartago, Costa Rica! In January 2006, I spent a month volunteering at a daycare center in the Central Highlands of Costa Rica. Our homebase was in Cartago, a city about 20 minutes outside of the capital, San Jose.  What makes this church so special is that it has a statue of a black Madonna, known as “La Negrita,” which is said to have magical healing powers. Costa Ricans and foreigners alike pilgrimage to the church when they or a loved one is struck by an illness or physical ailment.

Even though I was in Costa Rica to volunteer with children (I was in charge of fourteen newborn to six-year-olds and BOY was that a lot of work!), we also spent some time volunteering during our free time at a home for abandoned elderly people (with varying degrees of health issues and disabilities), and at a home for HIV+/AIDS patients who were abandoned by their families and excommunicated from their villages.

One of the most logistically challenging days of the trip was when we decided to load all the old people into a school bus (most could not walk more than ten steps without assistance), load a wheelchair for each one of them, and then help them out of the bus and into their wheelchairs so we could wheel them all around the church and over to La Negrita, who would hopefully heal them and ease any pains they might have. It was quite emotional for some, who clearly could use a little magic in their lives.  (Hey, at the time, so could I.) Towards the end of the visit, we rolled them to the front of the church, behind Costa Ricans who crawled up the aisle on their knees (this was something I had never seen; imagine an enormous church full of people with their children inching their way down the entire nave on their knees, in prayer… it was a tender thing to watch). One of the older women even got up and started dancing in front of La Negrita. Another old man tried to run away. We caught him.

Of course, I was given the largest of the elderly people to wheel through the church, up and down hills and ramps, across uneven cobble stones and around sharp turns. But when we sat him in front of the altar in a row with ten  wheelchair-bound friends, they all sat silently and still, staring at the cross, praying with the hundreds of other people who were there on this regular morning, hoping for someone or something to ease their pains and bring them peace.

Here are some more photographs of the basilica in Cartago. 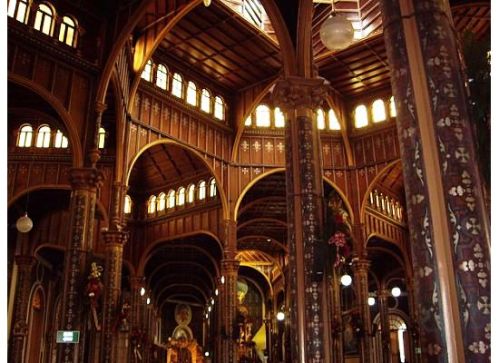 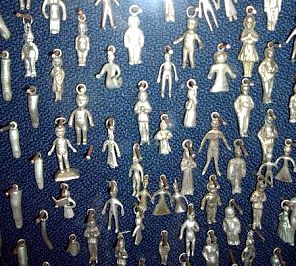 This is just a small snapshot from a wall full of pendants. If you look closely, you can see that the tiny figures represent different ailments. Every body part was represented in the glass case, and many full-body figures as well, with swelling in the abdomen, or a hand touching where it hurts on the head, or pregnant women, a heart, a finger here, a leg there… all to indicate the location of an ache or pain. Sick or injured people come to the church with the pendant that represents the part of the body for which they seek healing from La Negrita. It’s fascinating to see all the tiny pieces of jewelery, most of which are not much bigger than a coin!

For the sake of comparison, here is a photograph of the OLDEST CHURCH in COSTA RICA. Located in the beautiful Orosi Valley (see photo below), this church was originally built in 1574, but after a series of earthquakes, it was abandoned. It still stands, but mostly as ruins. And in a completely different way than the great basilica of Cartago, it’s beautiful, and maybe even a little magical. 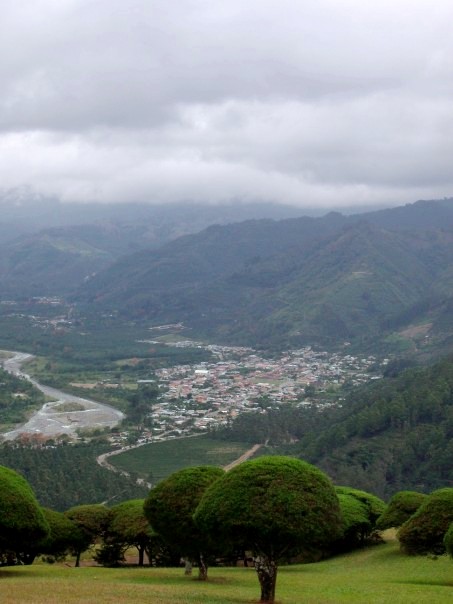