First, I want to thank all of you for the encouragement and support as I take a risk. It means more to me than you know!

Everest and the Himalayas. Meghan G.

Yes boys and girls (specifically Ben, Missy, Geordie, and Ursula-sorta), the last Mystery Snapshot is of the one and only Mount Everest! (Wow, right?!) Located in the Himalayas, it is the highest mountain on Earth (29,002 ft above sea level). BUT, did you know that Mauna Kea on The Big Island, Hawaii, is the tallest mountain in the world from base to peak? And I’VE BEEN THERE! (see photo from Snowmance entry).  It’s a pretty cool experience to drive from a sun-soaked beach all the way up to a snow-capped mountaintop (a woozy experience, I’ll add). But well worth it when that sun goes down, let me TELL you. To put things in perspective, Mauna Kea is 10,200 meters tall (that’s over triple the altitude of Quito, Ecuador – the second highest capital in the world), but only 4,200 m above sea level (6,000 m is submerged), whereas the peak of Everest is almost 9,000 meters high! There are plenty of fun facts about Everest (easily Google-able), but fun facts mean nothing when you’re standing at the base of the tallest mountain in the world.

Let’s hear what Meghan has to say about her encounter with Everest:

After a 48 hour train ride, a multi-day jeep ride, several breakdowns and an eight kilometer walk, we finally found ourselves below the majesty of Everest. It was a breathtaking sight – one of the most amazing and incredible sights I have ever seen.

Everest in the Distance. Meghan G.

To get to the base camp we parked the jeep at a nearby monastery, and after a riveting game of high altitude frisbee with the locals we embarked on our walk to Everest.

Struggling with altitude sickness, the walk seemed to stretch on forever and the looming grandiosity of Everest seemed to be almost a mirage. The starkness of the mountain stood in sharp relief against the barren landscape, and the simplicity of the environment (not another tourist for miles!) illustrated the reverence the Tibetan people have for their sacred mountain. Instead of turning it into a tourist trap, the Everest Base Camp is a simple green tent with a Chinese official checking permits. There is not even a sign to let you know where you are (Everest speaks for itself).

Shivering in the Himalayas. Meghan G.

Once past the tent there is a small mound which we climbed up to get a view of the mountain. I could not believe how strong the wind was – I was knocked over twice and taking pictures was quite the ordeal (but we managed!). Standing there on that tiny mound we encountered only six other people (fellow travelers from Switzerland, England, Bulgaria, Canada and America) who were also battling the wind. On that mound we shared a common bond as we each, in our own little world, took in the reality of this mesmerizing natural landscape. (Little did we know that these people would become our traveling companions on and off for the next month!)

Everest truly is a symbol of the Tibetan people: strong, solid, peaceful, and unassuming. It was a journey I will never forget and an experience I will carry with me for a lifetime.
Here, Meghan explains each of the photos:

After a freezing cold night, we arose bright and early in order to catch a glimpse of the sunrise over the Himalayas. We drove for about 1 1/2 hours in the pitch black until we turned a bend and there in front of us was the vast range of the Himalaya Mountains.  My friend and I had a habit of chattering away incessantly and oohing and ahhing at every beautiful thing we saw. But when we caught that first glimpse of the mountains we lost all ability to speak as we gazed in awe at nature’s canvas in front of us. After parking the car we went for a long walk up a hill and came to the top just as the sun was hitting the peaks (as seen in the photo). There was not a single soul to be seen for miles, just the rising sun, the beautiful mountains, me and my friend Selena. The stillness and peacefulness of that moment humbled us as we realized just how majestic and beautiful the unspoiled natural world can be. 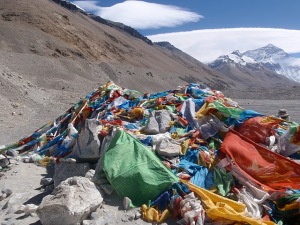 Any traveler to Tibet notices how spiritual and devoted the Tibetan Buddhists are. Their culture and way of life is integrally tied to the practice of Buddhism and it seeps though their art, architecture, and natural landscape. Due to their reverence for the natural environment, the entire landscape is left practically untouched, save for the encroachment of new Chinese high rises and hydro power plants.
Driving from Lhasa to Kathmandu in a 4×4 we had days during which we saw nothing but vast open space with a sprinkling of monasteries and sheep. Standing in stark contrast to the vast openness and simplicity of the Tibetan landscape were the mounds of prayer flags heaped over trees, mountains, roads, hills, and monasteries. Prayer flags are strung up to purify the air and pacify the gods. All contain the symbol of the the longta [windhorse] who carries the prayers up to the sky. The colors — red, green, yellow, blue and white — represent fire, wood, earth, water and iron.
This picture [the pile of prayer flags with Everest in the background, above] was taken on the walk to Everest Base Camp. The bright, colorful flags stood in contrast to the crisp bright sky and the blinding white snow capped mountains. The colors in this photo don’t even do the landscape justice, I have never seen such colors in my life. The landscape looked as if it were a painting and we had to keep reminding ourselves that it was actually real. 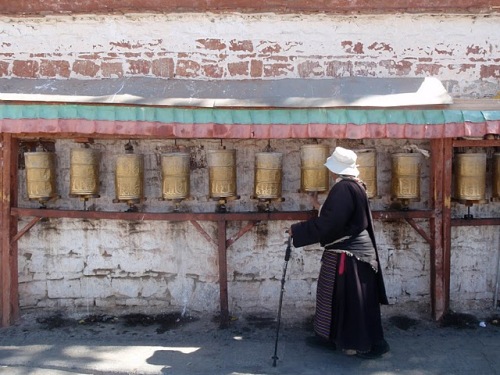 THANK YOU MEGHAN for contributing your beautiful photos and for sharing your experience with Mt. Everest!

One response to “Everest”