A Look Back, A Stroke Forward

Eleven years ago, I walked up the four flights of stairs to the top of Maine Hall and met some girls who would become my best friends. I had just gotten back from a 4-day backpacking and canoeing trip (no shower included), so my long braids, sun-kissed (ok, more like sun-slapped) skin, and laid back personality (I’d find out later…) had my new friends convinced I was a complete dirty West Coast hippie pot-head. Little did they know, I was far from it (a self-proclaimed goody-two-shoes in fact – although, with lots of sass!) and from New York City, but who doesn’t love a first impression?

Eights along the Charles. Cambridge, MA.

In that first semester of college, we were there for each other through September 11, painful divorces, personal struggles, first love, first hangovers, first heartbreak, and cancer in the family. We laughed harder than I have ever laughed in my life, and dealt with our first most-painful-experiences together, without having our parents to comfort us in the other room. In the years that would come, we would experience more love, and then more cancer, more heartbreak, crazy travel adventures, live-in boyfriends, and yes — more laughter that had us curled up on the floor with tears rolling down our cheeks.

The other day, I walked into a restaurant in Cambridge where — for the first time since college — we were all together again (ok ok, with the exception of ONE, and AB you were missed!). It was a bit mind-boggling, but a beautiful time warp. 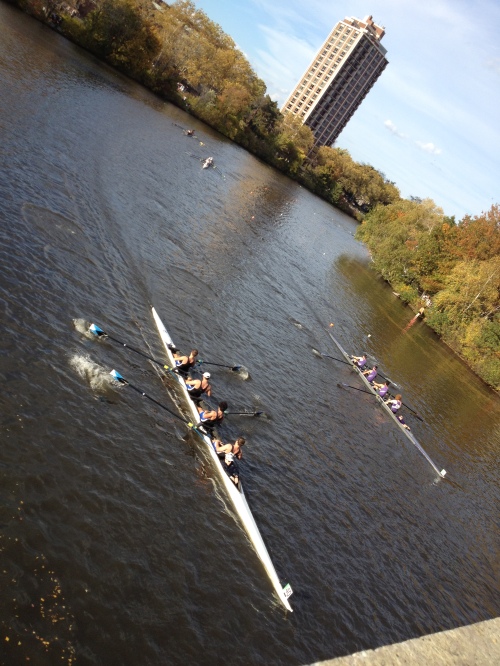 Everyone is the same — almost. When we first met, life was a simple clean slate. Over time, we became more complex, with layers of experiences forming grooves and bubbles in our emotional composition. Now, we’ve been through the ringer of life-in-your-twenties — and we’ve made it! We’ve been almost completely squished out of a decade that leaves its indelible mark on you in all sorts of ways. And yet, we can still come together, take a few shots (oh geez – so not my thing), go out dancing, and laugh so hard it hurts. But man, it’s amazing how much has happened between those first campus-wide dance parties at Bowdoin, and our current career paths.

Then last weekend, I reunited with the boats, the spandex, and many of the teammates that became my crew team family all four years of college. I got to see my coach, who still wears the same shirt, pants, shoes, and hat every day to practice, and the boats I spent many misty Maine mornings in, watching the sun come up and the water drift by. Some things change, some things never do.

Home can be a strange, sometimes intangible place. It can be the front door you walked up to your entire childhood, or it can be the crazy people you walked up to in head-to-toe spandex almost every morning of college. It can be the boat you spent hours in during some of the most special moments of your life, or it can be a race, a city, a second when you are surrounded by strangers. You can live a lot of places, but you only find so many homes. So far, I’m pretty darn happy with the ones I’ve found. But I’m not totally “home” just yet…

Sun sparkling off the water. Head of the Charles Regatta. Cambridge, MA.

This past weekend, as I walked around the Head of the Charles Regatta feeling old at this event for the first time, I couldn’t get over how intensely comfortable and at-home I felt among the rowers. I would have done anything to get in a boat (I tried!), not to row away from where I was but perhaps to row back to that place I remember so well. Home has become a moving target, so sometimes it’s tempting to just take a bow and arrow and aim right for the bullseye you’ve hit before.

Forgive the nostalgia, but two big reunions back-to-back got me thinking about time. Then, the Time Keeper at NYU passed away last week… I used to walk by him every day at NYU. He would yell at the top of his lungs “TEN MINUTES!! TEN MINUTES!” when it was ten minutes before a class starting. At under five-feet tall, I heard some nasty people yell things back at him, but he had a job to do (nobody paid him), and he wouldn’t let anyone stop him. It was a little annoying (he was LOUD and stressed a lot of students out), but he was just another part of daily life that blended in with the NYC noise. Only now that he’s silent, we want to stop and listen. So, hey. Time passing, Time Keepers, reunions… I couldn’t help myself! 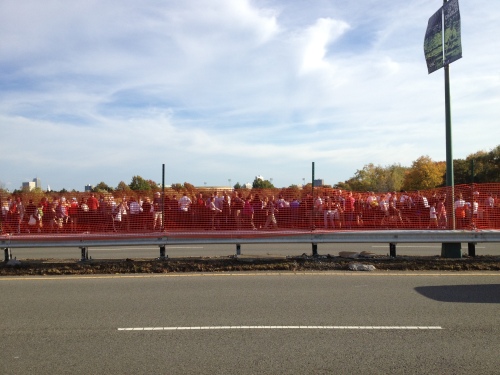 I’m in a weird in-between place, as I imagine some of you are too (or am I alone here?!). The grad school apps are almost complete, and the wheels are in motion for yet another life change. It’s all very exciting, I must say. Surreal, too. As I take some strokes and listen to the water drip off my oar blades, I’m rowing in a new direction I’ve never actually gone before. The surroundings have changed, but some of the people haven’t. I have no idea where this leg of the journey will take me, but I’m pretty excited to still be in my spandex, exploring. I gave up on predicting what might be around the next turn a long time ago. So, for now, I guess I’ll just keep on rowing.

The end of a beautiful day of races. Head of the Charles. Cambridge, MA.

4 responses to “A Look Back, A Stroke Forward”