Dawn’s Mystery Snapshot is, in fact, of beautiful Bruges/Brugge, Belgium. My favorite guess would have to be Nato Potato’s, “Somewhere in space. Or Belgium.” But the winner is Ursula, who was right on (even if she only guessed Bruges because she “likes the way it sounds”).

When it comes to languages, things get a little more complicated. The official language in Bruges is Dutch, but Flemish — a slight variation of Dutch — and French are also widely spoken. I’ve read about it, and Dawn has kindly explained it to me, but if I’ve learned anything about Belgium it’s that language is a VERY complicated issue. But no need to freak out about which Rosetta Stone to buy before a visit: For better or for worse, most people in Holland are fluent in English. Many Dutch people speak even better English than we do.

“If you didn’t recognize the orange tiled rooftops, or the narrow canals, you must have noticed the two cathedrals that dwarf the rest of the landscape (there are nine others out of view).  Notice also that this view is from far above even the cathedrals.  The photo is taken from The Belfry, up 366 steps of a narrow, winding staircase.  The 13th-century building was an observation tower for spotting fires and other danger, and there is still a full-time “carilloneur” who plays the 48-bell carillon.  It’s almost ear-splitting from the upper tower, where you’re right next to the bells!

“At street level, the city is a perfect fairy tale.  It has the cobblestone streets and smoky cafes of quintessential Europe; the courtyard of the Beguinage blossoms with daffodils in April, and Belgian beer, waffles, frites and chocolates tempt you from every corner.  If you wander far enough down hidden, winding alleys, you’ll find the creperies, old city gates, and windmills that most tourists never know about. 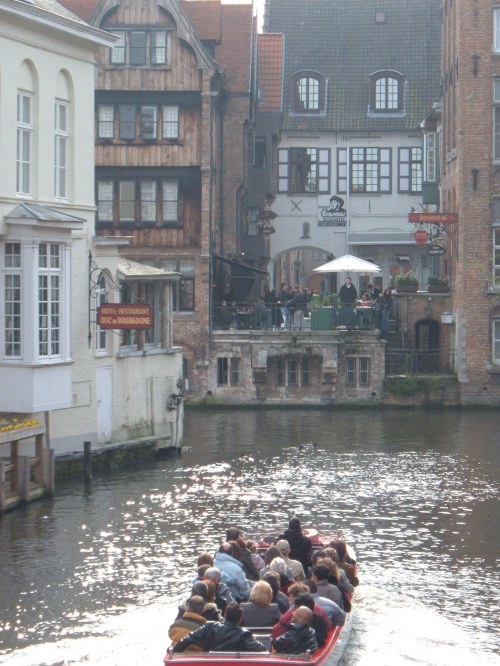 “The movie, ‘In Bruges’ [watch the trailer here. The movie picks on Bruges but, at the same time, does a good job showing how beautiful it is] is right about one thing: it’s no party town. But that’s exactly what draws people to it.  Particularly as an American, standing among 12th-and-13th-century buildings is just surreal: here we understand what HISTORY really is.”

* NOTE: All the photographs in this entry were provided by Dawn R. Dank u wel!

3 responses to “When In Bruges”